A yantra is a geometrical diagram of great power. Shri Yantra is considered to be the most sacred and most powerful yantra in the universe. It is said to bring material and spiritual wealth into life and to bless the user with peace, strength and success. It is said that when one meditates on Shri Yantra, one understands all of creation and that which is beyond creation. The Shri Yantra is one of the oldest and most powerful symbols in sacred geometry. It is a 2D representation of the divine cosmic matrix that creates reality. Yantra means tool and Shri refers to the sacred. So by interacting with it in meditation, you can get rid of the negativity and achieve spiritual and material wealth.

The yantra represents the creation process. The point in the middle – Bindu is the portal to the unmanifested divine source from which the diversity of the material world arises. On the energetic level one could say: The Sri Yantra draws cosmic energies from the universe through its Bindu and continuously releases divine energy in its surroundings. The Bindu represents pure consciousness, while the surrounding structure can be viewed as facets of consciousness. The overlapping triangles around the Bindu are like prisms that divide the primordial light into a multi-dimensional rainbow. Four large triangles pointing upwards represent Shiva, consciousness, the male principle. Five triangles point downwards: They show Shakti, the woman, the cosmic energies, the divine mother. The overlapping triangles contain a fractal world. 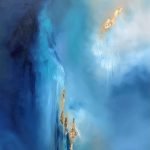 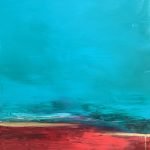 The benefits of Shri Yantra do not end with meditating on them. If you have a Shri Yantra symbol in a room, you can energetically cleanse, harmonize and noticeably charge it as well as align the energies of the people who live there.

The Shri Yantra is considered a highly effective tool for meditation, contemplation, concentration and is said to have a strong influence on success, power, authority and financial success, provided that these aspects are to be achieved in the context of honorable, mindful and peaceful action. Meditating on the Shri Yantra helps us on the way to material and spiritual prosperity, harmony and inner peace. The energetic effect of Shri Yantra is said to be seventy times greater than that of a pyramid.

The goal of contemplating Shri Yantra is to discover its innermost sources in order to promote the process of becoming. The Shri Yantra has a profound effect on the person who draws, paints or meditates on it. It helps control the mind and senses and creates a high frequency of energy which in turn helps convert the negativity of the environment into a more positive vibration. The Shri Yantra can correct defects of the North (health, prosperity and success) and the Northeast (energetically the most important area of the house). When placed in the northeast, it can effectively improve the energies of the entire home. If there are severe defects in the north as well as in the northeast, the Shri Yantra is an important and powerful corrective.

You can find the powerful artworks of Werner Szendi that deal intensively with the Shri Yantra here.